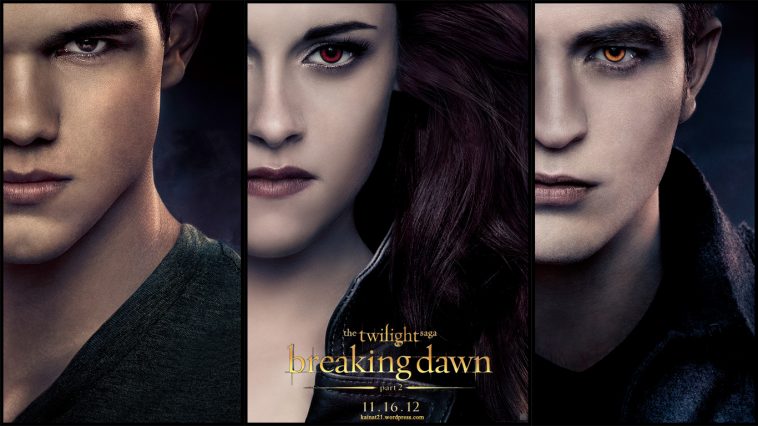 The Twilight Saga is a series of four vampire-themed fantasy romance novels, two companion novels, and one novella, written by American author Stephenie Meyer. Released annually from 2005 through 2008, the four books chart the later teen years of Isabella “Bella” Swan, a girl who moves to Forks, Washington, from Arizona and falls in love with a 104-year-old vampire named Edward Cullen. The series is told primarily from Bella’s point of view, with the epilogue of Eclipse and Part II of Breaking Dawn being told from the viewpoint of character Jacob Black, a werewolf. The novel Midnight Sun is a retelling of the first book, Twilight, from Edward Cullen’s point of view. The Twilight Saga is a series of five vampire-themed romance fantasy films from Summit Entertainment based on the four novels by author Stephenie Meyer. The films star Kristen Stewart, Robert Pattinson, and Taylor Lautner. The series has grossed over $3.3 billion worldwide. The first installment, Twilight, was released on November 21, 2008. The second installment, New Moon, followed on November 20, 2009, breaking box office records as the biggest midnight screening and opening day in history, grossing an estimated $72.7 million.The third installment, Eclipse, was released on June 30, 2010,and was the first of the series to be released in IMAX.

Are you a Twilight saga super fan? If so then take this quiz.