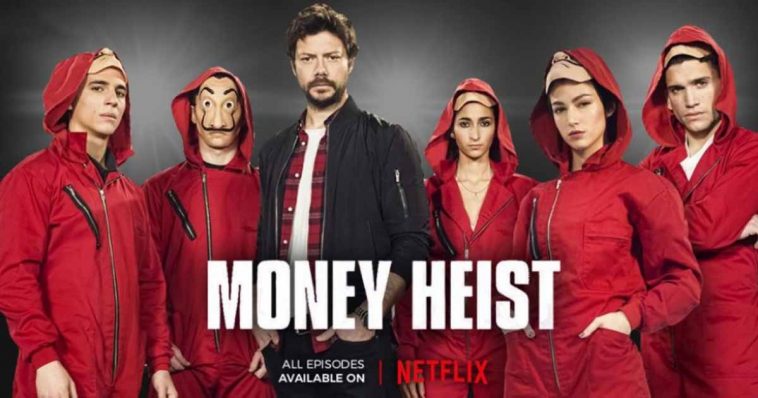 A criminal mastermind who goes by “The Professor” has a plan to pull off the biggest heist in recorded history — to print billions of euros in the Royal Mint of Spain. To help him carry out the ambitious plan, he recruits eight people with certain abilities and who have nothing to lose.

The group of thieves take hostages to aid in their negotiations with the authorities, who strategize to come up with a way to capture The Professor. As more time elapses, the robbers prepare for a showdown with the police.

Money Heist (Spanish: La casa de papel, “The House of Paper”) is a Spanish heist crime drama television series created by Álex Pina. The series traces two long-prepared heists led by the Professor (Álvaro Morte), one on the Royal Mint of Spain, and one on the Bank of Spain. The series was initially intended as a limited series to be told in two parts. It had its original run of 15 episodes on Spanish network Antenna 3 from 2 May 2017 through 23 November 2017. Netflix acquired global streaming rights in late 2017. It re-cut the series into 22 shorter episodes and released them worldwide, beginning with the first part on 20 December 2017, followed by the second part on 6 April 2018. In April 2018, Netflix renewed the series with a significantly increased budget for 16 new episodes total. Part 3, with eight episodes, was released on 19 July 2019. Part 4, also with eight episodes, was released on 3 April 2020. A documentary involving the producers and the cast premiered on Netflix the same day, titled Money Heist: The Phenomenon (Spanish: La casa de papel: El Fenómeno). In July 2020, Netflix renewed the show for a fifth and final part.

Take the ultimate Money heist trivia . Only a true fan can get 100 per cent in this quiz. Lets find out!